Eight times so far this year a credit union has bought a bank, according to Credit Union Times’ count.  Some deals are small – Verve, for instance, paid $43 million to buy South Central Bank in Chicago.

Some are bigger such as Arizona Federal Credit Union’s buy of  Pinnacle Bank in Scottsdale with its $236 million in assets. No details on the purchase price have been released.

In Florida – where the recent credit union buying a bank trend kicked off in 2015 when Achieva Credit Union bought Calusa Bank for $23.2 million — there have been three buyouts of banks by credit unions so far this year.

In the Chicago area, there also have been three purchases of banks by credit union so far this year.

And the deals keep coming.

Understand this: some credit union thought leaders are adamantly opposed to this trend.  To them, banks and credit unions are different and never the twain should meet. 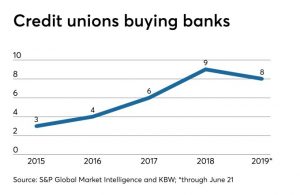 Still, others worry that as credit unions incorporate more elements from banks – including hiring bank trained staff – they may become more bank-like and lose the credit union difference.

Banks incidentally are vocally opposed to the trend – or put more accurately they see this as a proof that credit unions should lose their tax exemption.

The other reality is that community banks are struggling. Their numbers are dwindling as the big banks get bigger and smaller, community banks find it harder to compete. For them, in some cases, the exit strategy is to sell the assets – primarily branches, loans, customers – to another financial institution and if it happens to be a credit union, so be it.  (Here’s a list of many CU – bank deals. Go to page 8.)

Big banks also seem largely uninterested in buying struggling community banks.  For many of the latter, a possible acquisition by a credit union looms as an attractive exit strategy.

But, first, what specifically is in this for a credit union? The St. Louis Fed tackled exactly that question.  Here’s what it said:

“So what would entice a credit union to pursue a bank instead of another credit union? For one thing, it may be the fastest way to expand into new business lines that are more closely associated with banks (for example, business lending). The average ratio of business loans to total loans for the acquiring credit unions in the quarter before the transaction was 8.6 percent, whereas the average for the acquired banks was 33.8 percent. The acquisitions of the commercial banks raised the business-loans-to-total-loans ratio in the credit unions to 10.9 percent.”

Moreover, like credit unions, small community banks tend to have strong community ties and know their customers on a more personal level than their large-bank counterparts do. This strong community relationship can be an asset to the acquirer.”

Other experts suggest that the number of sizable, viable credit unions that are available for merger into another credit union is dwindling. The attractive candidates have already merged, at least most of them have.

Very probably, we will see a continuing stream of credit union purchases of banks or at least parts of banks.  But probably not that many.  The St. Louis Fed believes this kind of deal will never become commonplace: “Because of all the regulatory and business-model barriers involved, it will likely never be a dominant transaction type.”

Which brings us to the big issue: are bank purchases in fact good for credit unions?

For starters, know that the bank charter is not transferred in the deal.  A credit union cannot own a bank charter, said Wendell “Bucky” Sebastian, a co-founder of Callahan, longtime CEO of GTE Federal Credit Union in Tampa, general counsel of NCUA, and, at the start of his career in banking, a senior official in an Illinois regulatory agency.  Hear Bucky’s candid podcast for a lot more opinions including Bucky’s optimism about the credit union future. Listen here.

As for foes of bank acquisitions, there’s Jim Blaine, retired CEO of SECU, the giant North Carolina credit union, has strong opinions on this topic. He ventilates his ideas with gusto in the CU2,0 podcast.

Blaine opposes credit union – bank mergers. He sees them as a manifestation of an increase in what he calls the commercialization of credit unions.  At their founding, credit unions were created to serve members. Not to sell them products they don’t need which of course is a bank business plan.

Blaine also said that in negotiations between a banker and a credit union executive, he’d bet on the banker to win.

Bucky Sebastian – who supports credit union mergers, definitely ones with other credit unions, in his podcast – also comments that “banks exist for one purpose – to take as much from their customers and to give it to their shareholders as they can.”  That’s true. So ask yourself how that culture blends with a credit union’s.

That deep philosophical concern is aired by Gary Oakland, the retired, longtime CEO of BECU who saw that institution grow from a couple hundred million in assets to over $10 billion during his tenure. (He offers his perspectives on a range of issues facing the industry in his CU2.0 podcast – find it here, it posts in late July – and he specifically addresses why BECU grew so big, so fast when many other credit unions did not.)

“You are seeing a change in leadership of credit unions,” says Oakland.  “A lot of new leaders are coming in from the banking industry. There’s not as much development of homegrown leaders.”

Which leaves us with a troubling question: at what point does a credit union assimilate so much bank characteristics that it ceases to be a real credit union and instead becomes a bank? Sure, the charter may say credit union.  But is the institution truly a member-focused institution?

Is that case closed, credit union purchases of banks are bad? Not so fast. Some bank branch buys win broad applause. In the Deep South, Hope Federal Credit Union has bought a number of bank branches, mainly from institutions that had announced plans to close those locations.  Hope CEO Bill Bynum talks at length about that strategy in his CU 2.0 podcast.

These acquisitions have been widely praised.

Even the cynic Blaine applauds what Hope is doing and he indicated that in negotiations he’d bet on Bynum to beat the bankers.  In some cases Hope may well have gotten the branches at no cost.

That’s a hard deal to turn down especially when a credit union can do tremendous good for the community by using the facilities to offer financial services to a community that might otherwise become a “banking desert.”

That does not mean however that it’s full steam ahead for bank mergers, either.

Eyes will be on growing numbers of credit unions that have consumed banks, or hired senior bank executives.  The verdict has not been written.

But it will be.

Want to read more from Robert McGarvey for CU 2.0? Check out our podcast library here.